Reader Question: Back to Sleep and Choking Risk

Following a recent post we received the following question: I know that I should put my baby to sleep on his back, but I am worried that if he spits up he will choke. Do you have any suggestions for preventing choking during sleep?

Putting babies down on their backs is widely recommended as the safest way to place babies down to sleep. (1) In fact, since this recommendation was first made in 1992 and the Back to Sleep Campaign was initiated in 1994, there has been a 50% reduction in the number of infants dying from Sudden Infant Death Syndrome (SIDS). Although there has also been a sharp increase in the number of infants who are put down on their backs to sleep, fear of choking is one of the most common barriers preventing parents from following the recommendation. (2-5) In a recently published study, 56% of the participants believed that choking risk was highest when infants were placed on their backs. (2) 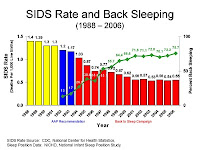 (Click here to view a larger version of the graph)

Fortunately, studies also show that the increased prevalence of putting babies on their backs to sleep was not associated with an increase in deaths by choking. (6) Similar findings have been reported in other countries with recommendations similar to the US Back to Sleep Campaign, including England and Australia.

Even though the risk of choking is low, there are some things you can do to help ease your fears:

3. Colson et al. Barriers to Following the Supine Sleep Recommendation Among Mothers at Four Center for the Women, Infants, and Children Program. Pediatrics. 2006;118(2):243-250.

6. Malloy MH. Trends in Postnaeonatal Apiration Deaths and Reclassification of Sudden Infant Death Syndrome: Impact of the “Back to Sleep” Program. Pediatrics. 2002;109(2):661-665.

Posted by Jennifer Banuelos at 10:29 AM