Let’s Talk about Tantrums Part I: The Basics 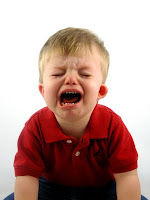 If you haven’t yet had the unforgettable experience of having your own child throw a tantrum in a public place, you’ve probably seen your share of tantrums in stores, restaurants, or at the movies. Nearly 90% of both boys and girls between 18 and 36 months of age have tantrums. Even though it seems like they last forever, most tantrums last between 5 and 10 minutes (75% of tantrums last 5 minutes or less). Children may develop their own tantrum “style” but tantrums typically include one more of the following behaviors: screaming, crying, stamping, throwing, running, pushing, or flailing arms and legs. Sometimes children having tantrums will bang their heads, punch, or kick anyone within reach. While we realize there is plenty of advice for parents to help them understand and deal with their children’s tantrums, we’ll offer our own take on this common experience.

Why does a sweet happy singing child suddenly melt down into fits of rage? Why do anger, frustration, sadness, and fear become so out of control in older infants? In the past, parents believed that older infants and toddlers chose to kick and scream to get their way. Babies certainly learn quickly that specific cues or behaviors are likely to get desired responses but these discoveries come out of babies’ experimentation to find “cause and effect,” not out of attempts at manipulation.

Older babies’ brains are ready to experience feelings such as anger, disappointment, and frustration but they aren’t able to control those emotions. Think of it like leaving a pot of water on a hot stove and finding that you can’t turn off the burner or move the pot once the water has started bubbling. The water continues to boil, becoming more and more intense until the water evaporates away. Compare this image with that of the toddler shouting with frustration at his mother in a store, getting louder and louder until he bursts into tears and falls exhausted into his mother’s arms.

Jen B got first hand experience with a tantrum just a few days ago returning home with her family from a trip to Grandma’s house. Her daughter, Olivia, happy to take trips throughout the weekend, suddenly became aware that they were headed home. “Where’s the beach?” She asked a little distressed, and then asked if they were going back to Grandma’s house. Of course, she was reassured that they would see her grandparents soon but Olivia was already angry and losing control. The screaming and crying began and lasted all the way home.

In a 2003 study, researchers studied 335 children to get a better understanding of tantrums in children up to 5 years of age. Some of their findings include:
During tantrums, screaming and crying tend to go on continuously; aggressive behaviors tend to be intermittent
Shorter tantrums (less than 3 minutes) usually include only crying and one other behavior like stamping or dropping to the floor, longer tantrums (3 minutes or more) are more likely to include more behaviors and aggressive actions
Children who are distressed (sad or fearful) will have longer tantrums than those who are angry

We know that tantrums can be exhausting and embarrassing for parents and children. In part 2 of this series, we’ll share some tips to help you cope with tantrums.