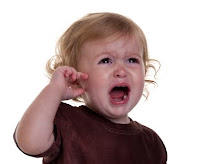 The toddler brain does not work like the adult brain. When you suddenly hear a barking dog behind a fence, you might be frightened for a moment, but another part of your brain will assure you that you don’t have to be frightened. When you don’t get something you want, you feel frustrated and disappointed, but you recognize and accept that you can't always get what you want (okay, that part might take awhile). If you get into an argument with someone you love, you get angry, but you realize you need to calm down so that you can work things out. A toddler’s experience of these every day occurrences is quite different. Once a toddler is frightened, disappointed, or angry, he may become overwhelmed with emotion and unable to control his actions. As we continue this series on tantrums, we’ll share common triggers for tantrums in children less than 2 years old.

Most children have tantrums because they are experiencing one or both of two powerful emotions – anger and distress. For most children, their anger flares for only the first few minutes of a tantrum. When they realize that they will not get what they want, the anger is replaced by distress and sadness. They may cry hysterically for some time until they get tired and seek comfort. When toddlers start tantrums with lots of different behaviors, particularly aggressive behaviors like kicking or hitting, these tantrums are more likely to last longer than those that start with just one or two behaviors liking stamping and crying.

“I want to do it myself!”
An almost 2-year-old is old enough to want to do many things on her own but she is limited in her ability to carry out her plans. She’ll watch what others do (especially her older brothers or sisters) and assume that she can do the same things. Since few toddlers have the coordination and strength of older children and adults, frustration takes hold.

“I don’t want to.”
At the same time that older infants and toddlers want to do more things for themselves (like dressing themselves), they also become determined not to do certain things (like leaving the park). Because infants and toddlers are not able to control their rising emotions, even little disagreements over activities can boil over into angry confrontations.

“I want that!”
During infancy, children learn how to give cues to their caregivers to ensure that their needs are met. When they use hunger cues, they are fed. When they show discomfort, they are burped, diapered, or rocked. Sadly (for the toddlers), there comes a time when they find that their parents will no longer give them everything they want. As you might imagine, this takes some adjustment.

“I don’t feel good.”
We all tend to be cranky when we have a headache, stomach ache, or a stuffy nose. When we’re hungry or tired, we’re more easily upset by little frustrations. For toddlers, discomfort can amplify their emotions and reactions, so that little worries can lead to meltdowns.

By understanding more about why tantrums happen, parents can take steps (like making sure kids are rested, fed, and prepared before outings) to prevent some tantrums. Unfortunately, there really isn’t anything that parents can do to stop all tantrums. There are just too many factors outside of parents' control. Next time we’ll talk more about interventions parents might try to prevent or shorten their children's tantrums.