Baby Behavior in the News: Spoon-feeding vs. Finger-feeding and Obesity Risk

With all of the buzz around obesity prevention in the US, you may have seen this in the news recently: claims that babies starting pureed solid foods (referred to as traditional spoon-feeding) first are more likely to be obese compared to babies whose first tastes of solid foods were finger foods (also known as baby-led weaning). Here are just a few of the headlines you may have encountered: "Babies Fed on Solid Foods Less Likely to be Obese"; "Solid ‘Finger Food’ May Help Babies Avoid Obesity"; and "Giving Babies Finger Food Could Stop Obesity." Today we will take a look at the study behind the headlines and explain why the the results of the study are overblown in the media. 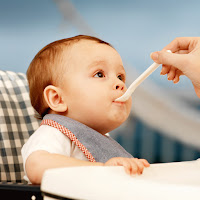 The Study: Baby knows best? The impact of weaning style on food preferences and body mass index in early childhood in a case–controlled sample

155 parents of children between 20-78 months of age were given a questionnaire asking about their children’s feeding styles, starting solid foods, food preferences and consumption patterns, whether or not the child was considered a “picky eater” and the child’s height and weight. This was a cross-sectional study, meaning that the questions were asked at one point in time, and in this case, the answers to the questionnaires were compared between 2 categories of infants, those who were “spoon fed” vs. “finger fed” their first solid foods (referred to respectively as traditional spoon feeding and baby-led weaning in this study). Specifically, baby-led weaning refers to babies who are fed their first tastes of solid food via finger feeding or self-feeding. Traditional spoon feeding refers to babies who receive their first solid foods from a spoon (parent-initiated).

When these 2 categories were made, 63 children remained in the spoon fed group and 92 in the finger fed group. All of the health information gathered via questionnaire was then compared based on these 2 categories. The researchers were interested in seeing if children who started solid foods via either spoon feeding or finger feeding were more likely to be overweight or picky eaters.


Study Limitations: What does all this mean?
While it does make sense that self-feeding, such as finger feeding, might result in better self-regulation of food intake compared to spoon feeding in which the parent is in charge of the feeding, this study was not designed to support this hypothesis. Cross-sectional studies only provide information about a snapshot in time, in this case provided via parental reports of infant feeding and health. Because this is not a randomized controlled trial, we cannot know for sure if finger feeding your baby first, as opposed to spoon feeding, actually leads to healthier weights and food choices.

Other limitations of this study include its small sample size and the majority of the sample itself had normal weights and longer than average breastfeeding durations. Babies in the finger-fed group were breastfed on average 23 months, more than double that of the spoon-fed group (9.5 months). The association between breastfeeding and obesity could have impacted the results of this study as well.

We would need larger studies with different designs to be able to make a strong statement about which method of feeding baby’s first food results in better health outcomes. Also, knowing that every baby is different and developmentally ready for new food textures at different ages, it’s hard to make one conclusion as to what is best for all babies. So for now, the original guidelines for starting solid foods still apply: for the specifics, read our post Starting Solid Foods: It’s Worth the Wait. You can also take a look at another related news flash we posted entitled: Breastfeeding and Later Solid Food Introduction are Protective against Obesity in Young Children.