Starting Solid Foods: It's Worth the Wait

I can remember being very excited to start solids foods with my daughter (what dietitian turned first time mom wouldn’t be, right?). I saw starting solids as an important milestone to be achieved. And though I knew that starting solid foods would not help my baby sleep through the night (yes, I’ve read the research!), I secretly hoped it might help her sleep just a little bit longer. I can remember family members saying “Oh! She’s eating solids now. 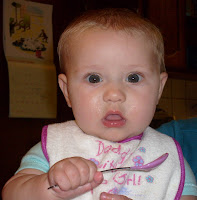 She must be sleeping more at night!” Then, they would look at me strangely when I would say “Nope. It had no effect on her sleep. In fact, she may be waking more frequently now.” They would counter with: “Wow. She’s a stubborn one!” True. She was (and is) one stubborn girl, but babies sleep through the night when they are ready to, and starting solids or giving a nice hearty bowl of oatmeal before bedtime won’t change that.

I’m sure I was not the first parent (or the last) to be confused by all of the information out there about starting solid foods. So, the following information is based on the American Academy of Pediatrics recommendations, my experience as a dietitian working with mothers and infants in a clinic setting, and my experience raising (and feeding) my own little girl.

The Recommendations
In the past, parents have been told to start solid foods when their babies are around 4-months old. Then, in 2004, the American Academy of Pediatrics provided updated recommendations stating that “infants may be physically ready to accept solid foods sometime between 4 and 6 months.” And just to make it more confusing, the Breastfeeding Section of the American Academy of Pediatrics* published their own recommendation stating that “Complementary foods rich in iron should be introduced gradually beginning around 6 months of age.” But, results from a 2008 study** showed that nearly half of all infants are still being fed solid foods before 4 months, and many doctors are still recommending starting solids around 4 months old. No wonder parents are confused!

Why wait so long?
While an infant’s GI (gastrointestinal) tract may be capable of handling solid foods by 3-4 months of age, oral, gross, and fine motor skills required for eating solids generally don’t emerge until around 4-6 months of age. Yes, that is a wide age range, but the new guidelines focus more on developmental readiness than on age. One baby may be ready at 4 months, while another isn’t ready until 6. When I tried to feed my daughter baby cereal at about 5 ½ months, she immediately turned her head away. I tried again at her next mealtime and she spit the cereal all over me. I took that as a sign that she wasn’t quite ready.

Ready or not?
So, how do you know for sure when a baby is developmentally ready to eat solid foods? Your baby needs to be able to do ALL of the following things to be ready to eat solid foods: sit up with support, hold her head steady, put her fingers or toys in her mouth, show she wants food by opening her mouth, close her lips over her spoon, show she doesn't want food by turning her head away and keep food in her mouth and swallow it.

What to feed first
The important thing is to start with an iron-rich food. Examples are iron-fortified infant cereal or baby food meats. Many parents start with cereal. You do want to start with single-ingredient foods, and feed only one food at a time to identify any foods that the baby may be allergic to. After starting a high-iron food, there is no specific order for new foods as long as there is a gradual progression of textures as tolerated. The progression of textures is smooth, mashed, chopped, and then tiny pieces. Just be sure that one texture can be chewed and swallowed before moving onto the next one.

How much should I feed?
Watch your baby’s cues. Babies will let you know when they have had enough. My daughter was very dramatic about this. When she was full, she would pick up her bowl of food and throw it across the room. Other, less messy, fullness cues include slowing the pace or stopping eating, spitting out or refusing the food or spoon, batting the spoon away, or closing mouth as spoon approaches. Maybe I should have paid closer attention to those early cues!

A final word about solid foods
If your baby doesn’t eat solid foods when you first offer them, don’t panic! At first, babies must learn to eat solid foods. Respect your baby’s fullness or disengagement cues, and try offering the food at a later feeding or on another day or week. Never force your baby to eat; that can create feeding problems later in life. As far as sleeping through the night is concerned, adding a little cereal before a baby is ready for it can do more harm than good and it won’t help a baby sleep longer. Starting solid foods early has been linked to increased risk for developing allergies and diabetes. As always, talk to your baby’s doctor about when it is best for you to start solid foods. But be sure to watch for those early disengagement cues, or you might get hit by a flying bowl!

Next time: What to Expect from Follow-up Appointments with A Preterm Baby