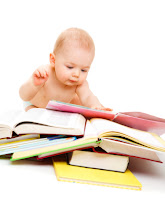 Here are the answers to our quiz:
1. How much larger do babies' brains grow between birth and adulthood?
The answer is c) Four times larger than at birth

2. Approximately, how many neurons (nerve cells) are babies born with?

The answer is b) 100 billion neurons (nerve cells).

Babies are born with more neurons than they can possibly use. As their brains develop, many neurons are "pruned" away because they are unused. This is a normal process which helps babies adapt best to their new world. The strongest neural connections remain as babies grow.

3. When do the areas of the brain that are most active in language development grow fastest?

The answer is b) Between 6 months and 24 months.
As we've mentioned in past posts, language development is happening before your baby says her first words. In fact, speech that babies hear when they are approaching their first birthday will help them learn to recognize the sounds characteristic of the local language that they will eventually speak.


4. True or False? The part of the brain that is used for planning and self-control is well developed by the time a baby is 12 months old.
This is false. The very last part of the brain to develop is the part that is used for planning and self-control. It does not function during infancy and develops slowly throughout childhood and adolescence. Babies don't have the ability to control themselves by thinking or reasoning. That comes much later.
5. What is the function of “mirror neurons?”

This is a little bit of a trick question because the function of these neurons is controversial. Mirror neurons were first identified in monkeys. It was found that certain parts of monkeys' brains became active when they watched other monkeys reach for some fruit. The parts of the brain that became active in the observing monkeys were the same as those in the monkeys who were reaching for the fruit. Therefore, the observing monkeys had neurons that would "mirror" those in the active monkeys. The theory is that monkeys and babies form connections in the brain while watching others to help them learn and understand what others are doing. The presence of "mirror neurons" may be behind babies' abilities to learn so much so quickly. Not all scientists believe there are functional mirror neurons in babies. Just remember, no matter how his brain makes it happen, your baby will be watching and learning from you all the time.

Email ThisBlogThis!Share to TwitterShare to FacebookShare to Pinterest
Labels: Quiz