Baby Behavior in the News: Mother and Crying Baby Asked to Leave Bus

A few days ago, this headline caught my attention: Oregon bus driver accused of berating mom, crying baby. Although the details are unclear and the investigation is still in process, news articles in papers across the country have covered the event that happened a few weeks ago in Portland, Oregon. Apparently, the bus driver pulled over after a baby had been crying for quite some time, despite the mother’s attempts to keep her baby calm. The driver walked back to speak with the mom; meanwhile other passengers urged the bus driver to keep going, saying that the baby was not bothering them. After the conversation with the driver, the mother took her baby off of the bus even though it was dark and she had not reached her destination. Although the exact sequence of events is still being determined, video footage shows that, over the next several minutes most of the passengers left the bus to stand with the mother and baby. For more information about the incident, you can refer one of the articles referenced below. 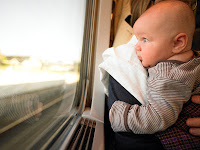 If you’ve read our blog posts in the past, you know that babies cry as a way to communicate their needs. We don’t know why this baby was crying, but it’s likely that the baby could have been tired (it was nighttime) and/or overstimulated from the environment, among other things. When babies cry, it’s hard for all adults to hear, but it’s important to remember that there is a reason that crying sounds terrible - it makes adults act to meet the baby’s needs. Other passengers reported that the mother had been “cradling and cooing” the baby a long time; a perfect example of using repetition to soothe.

We want to note that, after the incident, the bus company noted that their rules prohibit “vulnerable riders from being abandoned” and the driver has been put on leave until the investigation is complete. Also, the mother has not been identified and has not provided her side of the story. Regardless of the exact details, this is a clear indication of the need for increased understanding about normal infant behavior, not only among parents but in our society as a whole. (This is something we’ll keep in mind for future posts!)

What would you have done if you were this mother or another passenger on the bus with her? Have you ever been in a situation with a crying baby where you felt discriminated against? If you’d like to share a story with us, send us a comment.