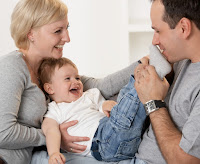 Last time, we described "social referencing" behavior in older infants and toddlers. Since babies can't understand all the words that their parents' say, they learn about the world around them by watching the expressions on their parents' faces and listening to the tone of their voices. When mom and dad are happy and relaxed and their voices are soft or sing-song, babies can assume that the new toy is safe and something they will enjoy. When parents' voices are sharp and their faces reflect fear or concern, babies instinctively back off. Scientists that study babies have learned that moms and dads often differ in their interactions with their babies and that these differences influence how babies see the world. In this post, we'll share research about differences in social referencing with moms and dads. BUT, we know that these generalizations don't apply to every family.
Mom as Safe-Haven
Traditionally, women have taken on the bulk of the responsibilities for infant care. That means that for many generations, women have been responsible for feeding, changing, washing, protecting, and soothing their children. As a consequence, many babies and children tend to see their mothers as the "safe-haven" and as the source of daily routines and comfort. Mothers' emotional signals are powerful practical guides for day-to-day dos and don'ts. For example, a mom's strong negative emotions about an object may keep her toddler away from it even when mom leaves the room (don't count on this, though). Mothers tend to be quite protective, limiting babies' play and activity more than many dads would. This makes practical sense, especially if mothers have other children to watch.

Dad as Playmate
When dad is in the room, an infant or toddler will use dad as much as mom as a social reference. Dads tend to be more encouraging of wider exploration and activity than moms. When compared with playing with mom, toddlers play with dad tends to be louder and more physical. Dads tend to try to surprise their babies with new games and activities - leading to more excitement, more laughter, and more tears than when babies play with mom. This kind of play may be related to infants' development of motor skills and exploratory behavior. While looking back at his parents, a baby might see a look of concern on mom's face while dad may look excited and encouraging. Which social reference is more powerful? That would depend on the baby. With more and more dads taking on traditional care giving roles, it would be interesting to try the studies again, to see if playtime changes with dads who are providing more of the basic care for their babies and other children. Maybe some of you already know?
References
1. Hirshberg LM, Svejda M. When infants look to their parents: I. Infants’ social referencing of mothers compared to fathers. Child Dev 1990; 61: 1175-86.