The worst advice we've ever received... 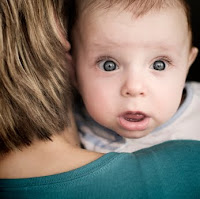 Give your baby beef jerky when she’s teething – Jen B

One day, my family was out shopping and our daughter started getting fussy. The checkout clerk asked me if my baby was ok and I told him that she was getting a tooth. His face lit up. “I have the best advice for teething,” he said. He went on to explain that when his kids were young, he would give them beef jerky to chew on when their mouths were sore. “It’s tough, so they can’t bite off any chunks and it tastes so good. The best part is that you’ll know she needs another piece when she throws it down because she’s gotten all of the flavor out.” I wanted to burst out laughing, but I just said "thank you" and rushed out of the store. As desperate as I was for a way to help fight the pain and end the fussiness, loading our baby up with salt and “beefy flavor” wasn’t going to be something I would ever try! For information about teething, see our posts on The Truth about Teething (Part 1 and Part 2).

Leave your baby to cry herself to sleep – Kerri

The worst parenting advice I received was from a friend of mine who told me always to let my baby, Elisabeth, cry herself to sleep in her crib. I remember sitting outside her bedroom door crying myself. It broke my heart to listen to her cry. I was told that she would eventually tire herself out and go to sleep without me having to rock or pat her. I tried this a couple of times and after about 20 minutes of her screaming, and her eventually making herself vomit from crying so hard, I decided that this method was not the right choice for our family. Every family may be different, but I learned very quickly that the best way for my family to get my baby to sleep was to rock her then put her down in her crib once she was asleep.

A dozen bad ideas to deal with persistent crying – Jane

As mentioned in an earlier post, when my daughter was a newborn, she was a "persistent crier" who would cry inconsolably for several hours per day. Of course, it was stressful to care for her and my husband and I were desperate for some useful advice. Well, we certainly got some advice, nearly everywhere we went, but very little was useful. It seemed that everyone was certain that they had "the cure" for my two-week-old daughter's fussiness. Some of the "cures" included giving her things to drink (teas, soda, brandy), feeding solid foods (cereal diluted and put into a bottle, syrup, oatmeal, or other baby foods), doing things to soothe her (vacuuming next to her, driving her around the neighborhood), using "special holds," leaving her for hours in a baby swing, and just telling her to be quiet. In those days, I didn't know anything about cues, persistent crying, or how different babies deal with stimulation. If I only knew then....

A little rum can go a long way – Jen G

The worst (well-meaning) advice I received was from a family member who told me to give my baby a spoonful of rum before bedtime to help her sleep. She said: “That will knock her out!” Luckily, I was too horrified to follow that advice in any way, shape or form. At the time I remember not having the words to respond to this elder family member. Now, looking back, I realize that many people will very lovingly give you outdated (or just completely inappropriate) advice about how to raise your child. A friend of mine once said “take what works for you and leave the rest.” So, that’s what I do. Most people are just trying to help you out because they know (usually from experience) that parenting is a tough job. To them I say “thank you for sharing!” and either incorporate their advice, if I think it is a good idea, or politely disregard their comments.

Next time: An update on one of our personal stories
Posted by Jennifer Banuelos at 12:27 PM