The Science of Infant Sleep Part I: The First 6 Weeks 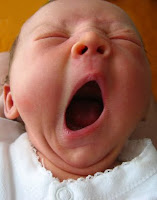 For nearly all parents, the first six weeks after their babies are born seem to be the longest and toughest in their lives. Struggling to understand their babies' needs, parents are awakened at random intervals day after day and night after endless night. It is no wonder that sleep is the most common topic discussed during early visits to the pediatrician. Parents want know when their babies will sleep through the night. In this first installment of our new series on the science of infant sleep, we'll take a look at the research related to why infants sleep the way they do at different ages and what, if anything, parents can do to help their babies sleep a little more.

Before we start, it is important for parents to know that we are not likely to provide "the answers" to parents' sleep concerns. Instead, we'll bring you up to speed with the latest information from the ever growing body of research related to infant sleep. We're taking a developmental approach as we did with the series on the development of language. We'll start with the prenatal period through the first 6 weeks.

How Do Babies Sleep Before They Are Born?
Since ultrasound technologies have become so advanced, researchers know far more than ever before about babies' prenatal behaviors. Distinct sleep states are likely to appear during the last trimester of pregnancy with "active sleep" (lighter sleep with rapid eye movements) being dominant. As any mother knows, fetal sleep cycles do not necessarily to coincide with their moms' sleep cycles. Many moms nearing delivery will tell you that their babies' movements wake them up at night.

What Controls Newborn Sleep Patterns?
In older children and adults, sleep cycles are controlled by specific areas in our brains based on circadian rhythms sensitive to light/dark cycles and by other mechanisms that increase the need for sleep after longer periods of being awake. These controls make us more likely to sleep during the night but also allow us to sleep during the day if we've gone too long without sleep. Another control system influences how long we remain in different types of sleep. Newborns, who are just as happy to sleep during the day as at night, do not seem to develop effective circadian rhythms until they are around 6 weeks old or later. They also are unable to stay awake for long periods of time. Parents of newborns think that their babies wake and sleep randomly, and for the most part, that's true.

Light Sleep, Dreaming, and Brain Development
Newborns sleep very differently from adults. They fall asleep dreaming and may keep dreaming for 20 or 30 minutes. We fall asleep into a "quiet" state of sleep and dream more later in the night and close to morning. Because dreaming happens in a lighter state of sleep, newborns are much more likely to wake up in response to noises, changes in temperature, and movement. When they are dreaming, newborns can make quite a few little noises and their eyes, facial muscles, arms, and legs will move a lot. Some babies may wake themselves up by their own movements. That's why swaddling, which restricts babies' movements, can help newborns sleep a little better. As babies get older, they don't move around quite as much when they sleep and swaddling is no longer necessary.

The brain activity related to dreaming is important for babies' development. Babies brains develop in part because of brain activity in response to stimulation. While babies are awake, they get stimulation from what they see, hear, feel, and taste. While they are asleep and dreaming, babies' brains are active, allowing for brain development to continue even when babies can't stay awake for very long. As babies get older and are able to stay awake for longer periods of time, they spend less time dreaming. During quiet sleep, babies move very little and they are harder to wake.

How Can Parents Help Their Newborns Sleep Longer?
Newborns spend a great deal of time in a lighter state of sleep, waking relatively easily. This is important for babies development and makes the baby likely to wake to feed, to stay warm, and to move as needed. Newborns are not much influenced by light and dark cycles and need to feed frequently. All this means that newborns are going to wake up...a lot...and there isn't much that parents can do about it. But, there are a few things that can make this exhausting time just a bit easier.

Even using all of these tips, parents of newborns will find that their babies will wake frequently. The very best preparation is to arrange to get some help from family and friends to get you through this tough time. Fortunately, things change quickly and more sleep is just around the corner.

Next Time: Big Changes in Sleep Patterns (6 to 16 weeks)