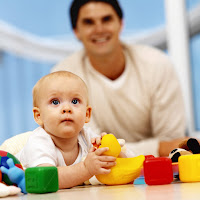 By six months, babies have become more predictable and are sleeping longer stretches, making caring for them much easier for their beleaguered parents. With more control over their own bodies, 6-month-olds become eager to explore their worlds and practice their ever expanding motor skills, sometimes finding themselves frustrated and a little fussy. Despite the ups and downs, many parents find this age to be one of their favorites.

Babies who are 6 to 7 months old are highly social and interactive with those they find familiar. They will squeal and smile, flirt and flail their arms and legs, hoping for a joyful response and approval from their parents. Sometimes the squeals will turn to shrieks if babies are not given the attention they crave. Now, before you start thinking that responding to your baby will spoil him, imagine how it would feel to suddenly realize that you have the power to communicate with those you love (like figuring out Skype for the first time). Wouldn’t you want to tell them how much you cared and how much you wanted to be with them? And wouldn’t you “turn up the volume” if you thought that they couldn’t hear you? That’s all that your baby is trying to do.

Interestingly, babies at this age also become wary of strangers, recognizing that some of the faces that they see are unfamiliar. While unfamiliar faces were of interest in the past, they now are a little unnerving. Around this time, you’ll want to take introductions a little slower, no more passing the baby from adult to adult as you did when she was younger. Let baby take her own time to get to know new people. If you are patient, you'll find that she is happy to accept new relationships that are not forced on her too quickly. By the second half of the first year, babies start to figure out that they want to stay closest to their parents and those they see each day. Separations that used to be easy are now a little rocky and may be filled with tears.

Along with their new found social skills, 6-month-olds become little scientists, experimenting with the world around them as much as possible. While it is controversial when “object permanence” emerges, many babies around this age will start to enjoy games where things apparently disappear then reappear. "Object permanence" refers to the understanding that objects that you can't see still exist. Very young babies will lose interest in things that are out of their sight and don't look for them. Older babies enjoy peek-a-boo and seeing objects that come out of hiding places, like an old-fashioned jack-in-the-box toy or a ball that rolls in one end of a tube and out the other. As they gain control over their arms and hands, babies explore objects with their fingers as well as their eyes and many will put everything they can into their mouths. Sucking on toys and tasting blankets become major pastimes. Obviously, care must be taken that only the right things end up getting investigated in this way. Building on earlier learning about “cause and effect,” 6- to 7-month-olds will start to vocalize in more consistent ways, hoping to get the same response. While using words is still to come, babies will babble using consonants and vowels, returning to sounds that seemed to get the desired response.

The rapid gains in motor skills over the last couple of months accelerate. As baby learns to sit for longer and longer periods without support, his hands become free for reaching and grasping toys in his reach, first with his whole hand and then with just his fingers. Moving forward becomes an important goal and babies will work hard to creep along on their bellies and eventually to pull themselves up on their hands and knees. Many babies find themselves crawling backward at first, often becoming a source of entertainment for older siblings. Practicing these new feats may be a 24-hour a day job and night waking may increase for a short time.

If you haven’t already completely baby-proofed, now is the time. Take it to a new level. Babies progress so quickly over the next few months, you should "proof" your house now as if your baby could stand and walk. It is vital that you make sure that baby can’t get hold of anything dangerous, because his instinct will be to poke, hold, and taste everything.

Next time: 8-10 months: Babies are learning to stand and may pull up on furniture; the view from the top is very exciting!
Posted by Dr. Jane Heinig at 5:59 PM