When Motherhood Doesn't Go According to Plan: Life with a Hospitalized Baby (Part 2 of 3)

Looking back, it seems like the next few months flew by, but I know that wasn't how it felt at the time. Olivia continued to breathe on her own and was able to get more and more milk through her feeding tube. Her heart was still weak, but it was getting stronger every day. She was gaining weight and the nurses and doctors were very impressed with her progress! Meanwhile, my husband and I got into a routine. I would go to the hospital for a few hours during the day while he was at work. Then, we would go back together after dinner. I was pumping every 2-3 hours and was making enough milk so that she never had to get formula. By the time she was 1 month old, she had gained almost a pound and 2 inches in length. A few days later, she was moved from the high risk room to the intermediate room! It seemed like everyday we had happy news to share, so we started a blog, where we could post pictures and keep our family and friends informed about her status. It was really helpful to be able to share even the smallest developments. 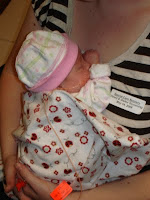 As time went by, we got to do more and more to care for Olivia. At first we were only able to change her diaper. Then, when she was strong enough to eat from a bottle or from my breast, we were able to feed her. Pretty soon, we were doing all of her care while we were there and the nurses were just watching!

After 8 weeks, my maternity leave was ending and I had to make what seemed like an impossible decision. We were still unsure about when Olivia would be coming home, so I had to choose to either take the rest of my vacation time or to go back to work and save my time off so that I could be with her when she came home. We ultimately decided that I should go back to work while she was still in the hospital. Thankfully, I was able to work from home and from the hospital for most of the following weeks.

Around the same time that I went back to work, we realized that she was rapidly achieving the milestones necessary for her to come home. Each hospital has a list of requirements that must be met before premature infants can be released, and she only had 2 left. She needed to get better at eating from her bottle and she needed to go 7 days without any drops in her heart rate. Time started to slow down. We got the house all ready, had her car seat installed and inspected at the police station, and attended the CPR and infant care classes offered at the hospital. Even though there was so much to do, it felt like we spent most of our time waiting.

All the waiting was worth it! 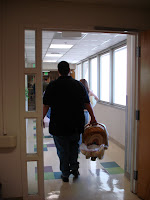 Just 74 days after she was born, (and 3 weeks before my actual due date) Olivia was ready to come home! Despite her rough start, she was a happy, healthy baby, but we still had to take a lot of precautions. She was still smaller than most newborns, weighing about 5 1/2 pounds. At first, she had doctors' appointments every few weeks and we were instructed to keep her home as much as possible. We had to be very careful about who came over to visit and make sure that she wasn't exposed to any illnesses that her tiny body couldn't handle. All of this seemed so simple compared to having to leave her every night. We were prepared to do whatever it took to have her home with us!

Once we got home, however, reality sunk in. I felt like someone needed to be watching her 24 hours per day. We didn't have the monitors to let us know if she needed us anymore. I constantly worried that she wasn't breathing or that her heart rate would drop and we wouldn't know. Within just a few hours of her homecoming, I was sure that she needed to go back to the hospital. This feeling went away over the next few days as we got used to our new routine. No more driving back and forth to the hospital. No more eating in the car or the hospital cafeteria. No more nurses dictating when she got to eat or when we were allowed to hold her. She finally came home to live happily ever after!

Fast-forward 13 months...to a much better place 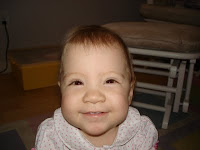 Olivia is a normal, silly toddler. She is growing like a weed. She walks. She talks. She does everything a normal toddler does. When people find out that she was born so early, they are shocked. She is extremely social and makes friends everywhere we go. She loves to read books, listen to music, and play ball. If anyone would have told me a year ago that this is what our life would be like now (which I am sure someone probably did) I wouldn't have believed them. Olivia is living proof that miracles do happen. Along the way, so many things could have gone differently, according to my plan, but if they had, we wouldn't be where we are today. I know that sounds cheesy, which isn't usually my style, but it is true. "Operation Baby Banuelos" may have hit some snags along the way, but we have the beautiful, sweet, smart baby girl that we always dreamed of.

Next time: Part 3 - Tips for coping with your premature baby's hospitalization.
Posted by Jennifer Banuelos at 10:24 AM